In the beginning of 21 century,the contactless card tech appeared on electronic hotel door locks.Contactless card is an RFID technology.Because of its ease of use and cheapness,RFID already become the trend of open-door technology.

RFID tech improved the way people use the key.People does not need insert key card to lock anymore. The contactless key will be identified just when people close it to the lock reader area.

KAHN Care about the future of hotel use electronic door locks

Many things changed in 10 years but hotel door lock did not.

After years of market analysis and research, KAHN launched the NEXT GEN hotel door lock’s development.

Human consumption needs are a continually iterative process. When the basic requirements are met, there will be a higher level of demand.
This is the source of human technological progress.

KAHN believes that in the future, hotel door locks has only one direction-provide more professional functions.
That is why KAHN C5 was designed. 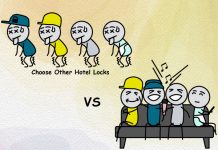 Hotel Lock Should Not Equal to RFID Locks The ugliness and beauty of hotel card locks

Buy a Card printer for your Hotel Staff use Cards

What is Hotel Doorbell System?

ABOUT US
Welcome to How choose hotel locks site! My name is Richard Alvin.The purpose of this site is to share and exchange hotel lock products with people related to the hospitality industry.
Contact us: info@hotelockpro.com
FOLLOW US
© Copyright Howchoosehotelocks.com All Rights Reserved | Powered By Renhonet | Post Sitemap | Page Sitemap | Page Sitemap
MORE STORIES

Why Does Any rfid Door Locks have plastics?